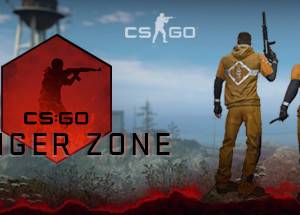 Counter-Strike: Global Offensive
All trademarks belong to their respective owners.

It's necessary to save hostages or defuse the bomb while playing for the latter. If you are on the side of the terrorists, you will have to plant a bomb.

Quality of designers', mappers' and modelers' work is great. All locations look really amazing, weapons and players also have pleasant appearance. Graphics in CS: GO can be gloomy or bright where it's necessary. There is no such pompousness as in Counter-Strike: Source. One of the main advantages that CS: GO has got good runtime performance even on slow computers.

Counter-Strike: Global Offensive depends on sound because many actions performed by players can reveal their positions. Therefore, you should listen to your surroundings to find out where the enemies are coming from. All the sounds have been recorded in high quality, so they won't distract attention. The only thing that may be annoying, is a soundtrack, but you can switch it off in settings.

Controls in CS: GO are standard for shooters. With w/a/s/d buttons you can move your personage, pressing shift, you'll make him move slowly, etc. For many players, basic sensitivity of the mouse is very high and uncomfortable. So, it will be necessary to change this parameter in settings. In addition, you can set your own buttons for various actions.

There are several modes in CS: GO:

Especially for newcomers, a simplified mode was introduced: some weapons have been removed, and the player is given a vest and a bomb disposal kit at the beginning of the round. In the competitive mode, everything remains the same.

For a victory at the end of a round, you are given money for which you can buy weapons. If you lose, you obviously will not be able to use cool guns.

Arsenal has expanded considerably in comparison with CS: Source. Players have got access to new pistols, submachine guns, shotguns and rifles. The range of weapons was considerable, but the players used the most powerful and beloved guns, and no one used other barrels at all. Valve found the original way out of this situation: the weaker weapon you use, the higher the reward will be.

The main innovation in this game is presence of skins for weapons. They don't affect parameters but look really nice. Some of these skins can cost hundreds and even thousands of dollars. Their price depends on experts' evaluation.

CS: GO is the game in which thousands of people play every day. So, you can become obsessed with it too. There are many modes to play either alone or with friends. Your interest may be stirred up by the desire to become Global Elite (it's the highest rank in the game).

So, CS: GO is worth your attention. It's, probably, the most popular shooter in the world. Here you can play with friends in various modes, buy different weapons, and get stylish skins.