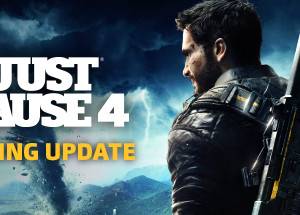 Just Cause 4
All trademarks belong to their respective owners.

The plot is simple: you have to kill the main criminal. The game is dynamic and gripping. Developers did not change the equipment, so you are still able to use a wingsuit, grappling hook, and other devices. You can download Just Cause 4 on Windows, PlayStation 4, and Xbox One platforms.

Graphics in Just Cause 4 look nice and fascinating. Developers managed to recreate a beautiful world of South America. First, we should talk about the water. It looks realistic, the waves are beautiful, and the ray of sunshine is above them. Avalanche Studios did their best to recreate a water movement.

The jungles look beautiful, especially when you fly with the help of wingsuit. The trees, cars, roads, and various buildings are nicely detailed. The animation and sounds of shooting haven't been changed radically. They are almost the same as in the third part of the Just Cause game series.

Comparing to Just Cause 3, Just Cause 4 has some worse graphics. For example, the grass in the previous part reacted to the main character's movement. It got pressed down after you walked on it. But in the fourth part developers decided not to make the same feature. However, these small details surely make the game more interesting. The lighting in the game became worse too. Just Cause 4 still looks good, but developers could have created more detailed graphics.

Controls in Just Cause 4 are similar to other third-person shooters controls. It is not hard to move Rico. Developers do their best to make the controls suitable for most of players. You can change some bindings in the game settings, and assign a button for a certain action.

You can see many interesting game mechanics from previous parts in Just Cause 4. For example, developers kept the wingsuit, so you could fly around the map, a grappling hook, so you could pull up to different objects. You can also connect various objects with the help of the grappling hook. The game is not realistic, but dynamic. That is the main feature of Just Cause game series. However, the main criminal looks boring, and it does not inspire fear. The weapons shoot better, but almost all the time you will be out of ammo. The missions remain the same. You have to destroy or blow up a certain object.

You may play Just Cause 4 again in case you liked the graphics or want to have some fun in the open world. The map is huge, so you will surely spend some time discovering new things for yourself.

We recommend you to play Just Cause 3 especially if you are a fan of a Just Cause series. This game is a nice choice if you want to have fun, blow up some objects and shoot with different kind of weapons.