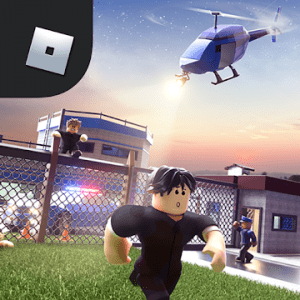 Roblox
All trademarks belong to their respective owners.

Roblox is very popular among the kids because it enables them to show their creativity, build various objects, and play multiple game modes. Here you can race, fly, fights, build different constructions, etc. Roblox is available for download on Android, Windows, iOS, Mac OS, Fire OS, and Xbox One.

It is hard to say that Roblox uses realistic graphics. Despite the fact, that this application was developed in 2005, the game is still popular, and the graphics allow many kids to run the app even on weak devices. The characters in Roblox are very similar to the Lego models. The picture does not look realistic. We can surely say that developers did a nice job because they managed to create a cartoon-like graphics, which surely attract the attention of children. The game uses 3D graphics. All the trees and building are nicely detailed. We should also mention that the sounds in this game are also not realistic. Actually, all of them perfectly suit the game.

Controls here are default for all third-person games. If you play this game on PC, you have to use WASD button to walk. You can also play Roblox on mobile devices. All the button are clearly visible. All you have to do is to tap the certain button on your smartphone to perform a particular action. To see the controls you can go in the game settings.

Your child is surely going to like this game. Developers did their best to make Roblox a safe place for kids. For example, children who are under 13, cannot use the chat. Developers have also added a special chat filter that prevents children from writing swear words. It is worth mentioning that some people complain about moderators.

There is an in-game currency - Robux. With their help, you can upgrade your character and its perks. You can also change the appearance of your character. You can select various T-Shirts, jackets, pullovers, jeans, shorts, hats, glasses, etc.

You can play Roblox as much as you want. It is not the game with a plot, so you can create your own game modes or play with other people on already existing servers. It will surely take some of your time to discover all the game modes.

We recommend you to play Roblox. Many kids will also like this game because of its cartoon-like graphics and the possibility to communicate with other players. You can create your own maps, set your character's appearance, and show your creativity in many modes.