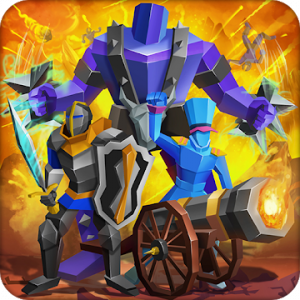 Epic Battle Simulator 2
All trademarks belong to their respective owners.

The game was developed by Rappid Studios and is currently among the most popular games in its category. If you want to try yourself in a strategic role, you can download Epic Battle Simulator 2 for your iOS and Android smartphone.

The graphics of the Epic Battle Simulator 2 game are simple, yet this fact doesn’t make the game boring. The application has minimalistic environments, and they are not very detailed in their design. The game looks great on different screens thanks to its colorful visuals, so you become totally immersed in its action.

Just as you can expect, this game uses various epic soundtracks to keep you entertained while playing. When it comes to sound effects in the game, they include various sounds of battles and make everything more realistic.

In this section, I want to focus on the gameplay of Epic Battle Simulator 2. The goal of the game is to select warriors and make sure that the army that you form can win on the battlefield. You need to make strategic decisions and place your troops in the best way possible to ensure your victory. What makes the game interesting is that you can advance your army with different effects, gear, and more.

When it comes to the actual battles, you have a chance to play in existing levels or custom ones. In addition to that, the most fun you can have is in the actual real-time multiplayer. When you win, you appear on the leaderboard and can improve your ranking.

The lasting appeal of Epic Battle Simulator 2 is quite high. Every time you play, you don’t know how everything will turn out for you. You can make different strategic decisions, experiment with placements, and more. As a result, the game continues to be engaging for a while.

Excellent War Simulator for Your Smartphone

If you are into battles and war strategies, Epic Battle Simulator 2 should be on your device. It is a fun game with excellent music, interesting gameplay, and great graphics. You can improve your troops in different ways and come up with the best plan to win your battles. The Epic Battle Simulator download is available for both iOS and Android smartphones.