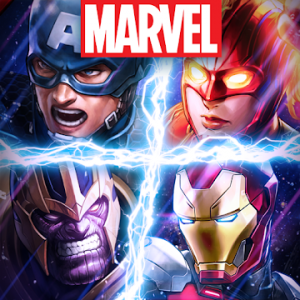 MARVEL Battle Lines
All trademarks belong to their respective owners. We highly value our visitors’ safety. Warning: Users can download the game from the links of Official Website and legal sources offered in the following articles.

However, the main disadvantage of this game is that you won't be able to fully enjoy the game mechanics if you are not going to proceed some in-game purchases that will give you extra money or some unique and rare cards. For now, more than 1 million people have downloaded MARVEL Battle Lines on their iOS and Android devices.

The graphics are not realistic, but more like cartoon-like. Developers decided to make a game with comics graphics. The cards are nicely detailed, and all the small objects are clearly visible. The animation is simple, so it should not impress you. While playing, you will see a moving background. This feature helps the game to look more dynamic. Because all you will see while fighting is a gaming table with your deck of Marvel heroes cards. The sounds are plain, and they probably will not surprise you too.

Controls here are as simple as it is possible. To throw a card, you have to tap on it and move on the gaming table. That is all you have to do to win. To search through the menu, you have to tap on the required button. There is no virtual joystick or other buttons like in modern action games. You can control the game process with a single tap.

The storyline is simple. The piece of a Cosmic Cube falls from the space to you. This object allows you to use the power of many Marvel heroes. Your goal is to collect all the pieces together and obtain all available superpowers to save the world from the evil forces.

Players start the match with 12 cards in their deck. To win, you have to place your characters in a row, so that they would deal great damage to your opponent. The gameplay is interesting because you have to collect new cards and discover various combinations that will help you to win the battle. However, there are many in-app purchases, and it is hard to play the game if you have not donated in this game.

Marvel Universe fans will surely like the game. You can play it as much as you wish. If you make some in-game purchases, you will get some rare cards and extra money. This will make your battles much easier.

We recommend you to play MARVEL Battle Lines especially if you are a fan of Marvel Universe. The game is an interesting time killer, and you will surely spend some hours playing the game.