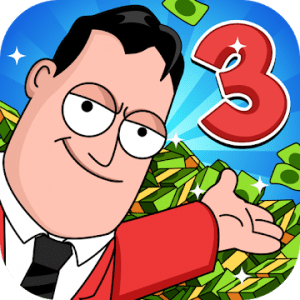 The Big Capitalist 3
All trademarks belong to their respective owners.

Released in 2018, The Big Capitalist 3 has already been downloaded by more than 10 million people. The game is available on PCs as well as Android devices.

Let’s face it: 2D graphics are no longer state-of-the-art, so they need to be really cool if you want your 2D game to stand out from the competition. While we can’t say that the visuals in The Big Capitalist 3 aren’t fun or take away from the whole playing experience, we do wish that they were a little more creative and unique. The same is true for the sound effects used in the game, as they are somewhat too standard and basic to make a long-lasting positive impression.

We are sure you are not going to experience any difficulties trying to figure out different buttons and menus in The Big Capitalist 3. The controls are well-designed and impose virtually no learning curve on new players. We do wish that the buttons with colorful icons also featured some text, but that’s a matter of subjective preference, and for the most part, you can easily figure out what a button is supposed to do even without any text hints.

As you start out, your only asset is a lemon. Well, not literally, but all life gives you at the beginning of The Big Capitalist 3 is a stand where you can sell lemonade. This may seem somewhat disappointing, but don’t worry - you’ll get to making your first million in no time. The lemonade stand may not bring in a lot of money, but the income is steady and consistent. This means that all you have to do is tap the “Collect” button to pick up money from the stand often enough to build your starting capital.

The easy part ends here, as you’ll have to be a lot more mindful of your actions and decisions once you’ve hired a manager to run a lemonade stand for you. As the game progresses, you’ll unlock new businesses with more complex income streams and hire more people to take the burden of running all these new companies off your shoulders.

Growing your business is not easy both in The Big Capitalist 3 and in real life. However, once you make some smart decisions and secure the cash flow, the game may get a little too predictable and even repetitive at times. So, unless you really enjoy The Big Capitalist 3 or are satisfied with the small bursts of diversity brought by the in-game events, you probably won’t want to revisit it after the initial interest in the game wears off.

A Fun Simulator of Making Money

Fans of simulation and strategy games are definitely going to enjoy The Big Capitalist 3, even if for a relatively short period of time. However, since this game is free, you don’t have to worry about spending money on something that’ll only keep you entertained for a couple of hours. Go ahead and download The Big Capitalist 3 from Google Play to try your hand at building and managing a financial empire!