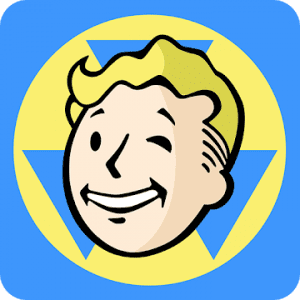 Fallout Shelter
All trademarks belong to their respective owners.

p>Fallout Shelter is an addictive and challenging survival game from Bethesda Softworks that first saw the world in summer 2015 and immediately gained much popularity among all genre lovers. Download Fallout Shelter now to see if you can keep a cool head and make the right decisions under the most dangerous do-or-die situations.

The game looks and sounds good enough for you to forgive its cartoonish 2D characters, which I found to be pretty adorable, and totally in sync with the Fallout universe visual art style. Moreover, the 2D graphics blend particularly well with the colorful 3D settings. The music is pleasant and does not get annoying after you have been playing the game for a couple of weeks.

The game generally plays well on newer mobile devices but can get slow and less responsive on older smartphones. I liked that the navigation and controls are easy and intuitive; however, the never-ending pop-ups sometimes drive you crazy.

The premise of the game is both exciting and scary: the world as we know it no longer exists; it was ruined by the recent nuclear war that killed millions and destroyed all the essential infrastructure. Those who were lucky to survive the war are now in need of a safe place to live, so they come to you for help.

In this game, you are an overseer of an underground vault who needs to make sure the place is free from radiation, safe, comfortable, and self-sustainable. As the manager, you will have to make quite a few hard decisions about who can and can’t stay in your shelter or who should be sent out to the wasteland on risky exploration missions. Also, you will be in charge of assigning jobs, allocating resources, resolving conflicts between the dwellers, and fending off numberless enemies.

While the gameplay is addictive, it is unlikely to keep you at your smartphone for hours at a time. Once the vault is ready and functioning, you will only need to check on it occasionally, recruit your residents to do different tasks, and spend in-game currency to purchase some essential stuff. As soon as you have seen and tried it all, little is left to do here. The game is fun to play but easy to put aside for a while when you are tired or busy.

The Fun Is Definitely There, but It Is Short-Lived

The game rightfully deserves all the attention and recognition it has gained so far. It has everything to make it a success: appealing gameplay, superior graphics, and many compelling missions to complete. However, with a more profound storyline, better customization, extra bonuses, and clear incentives for players to evolve, the game can truly shine. Download Fallout Shelter for your mobile device to see why it is considered one of the best free survival games ever.